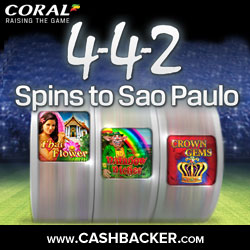 This is one of the most exciting promotions to date - win one of five sets of tickets for two to Sao Paolo for the World Cup 2014, plus £500 spending money AND a suprise prize to put you in the middle of the action on 19th June (I think we can guess what that's likely to be!).

From 1st May - 27th May Coral are hosting an outrageoous slots promotion where they'll be lining up 8 of their best online and mobile slots side-by-side for the ultimate playoff. And all you have to do to win is play! You'll still be in with a chance of winning big on the slots, and there are even some jackpot slots included in the chosen 8.

You MUST enter the promotion by clicking here, and then opting into the promotion - register a new account with Coral if you're not an existing member.

Then, simply play the games in each round and you'll get 1 entry into the prize draw for every £25 staked. The rounds are as follows: 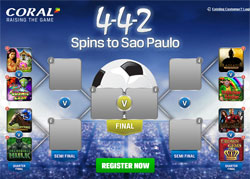 In each round, just play as much or as little as you wish, but remember that the more you play the more entries you will get into the prize draw.

There are several ways of winning the tickets to the World Cup. Plus, you're guaranteed to receive a bonus up to £50 if you've been playing on the slots which manage to get through to the next rounds.

In each of the Quarter Finals and the Semi-Finals, one lucky winner will be chosen at random to win a trip for two to Sao Paolo plus the suprise gift. The highest staking player from each round will also win the same prize. And then the highest staking player from the final round will receive the 5th set of tickets plus the suprise gift plus £500 spending money.

Good news - no silly terms! What you see is pretty much what you get. But here are a few things to be aware of: