This Halloween all eyes are on the brand new, highly entertaining video slot, Pumpkin Smash. This haunting Yggdrasil game has recently gone live at Mr Green Casino and you can have a smashing time when you play it in the site’s latest Cash Race.

There’s a prize pool of £25,000 in cash up for grabs in Mr Green’s Pumpkin Smash Cash Race and you could win your share at any time- simply by spinning the slot.

The frightfully fabulous prize pool of £25K will be shared about between hundreds of winners in the following increments:

Absolutely any one of those real money rewards could be yours when you take part in this Cash Race. Read on to find out what you need to do to get involved…

The Pumpkin Smash Cash Race will be on at Mr Green from October 27th until November 1st. all you need to do for your chance to get your hands on one of those cash prizes is sign into the site during this period and open up the game Pumpkin Smash.

Start spinning the reels of this spooky slot (with real money) at a minimum of 50p per spin and that’s it, you’ll be in the running to win the race and win some seriously impressive stacks of cash. 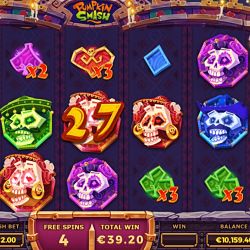 New for 2017, Pumpkin Smash is a stunning video slot from Yggdrasil which revolves around the iconic Day of the Dead festivities of South and Central America. This game comes complete with a nicely varied set of bonuses and amazing graphics which will keep you hooked as soon as you load it up.

There are plenty of cash prizes waiting to be scooped up in Pumpkin Smash- including a massive maximum payout of £36,000. With a Return to Player Rate of 96%, you’ll be in with a good chance of taking home a nice prize as you spin these reels.

As previously mentioned, Pumpkin Smash revolves around the Day of the Dead- or Dia de los Muertos- festival. You’re sure to love this theme as it fits the spooky Halloween feel perfectly but offers something strikingly different from the usual black cats and bats.

Dia de los Muertos is a vibrant and exciting holiday in Latin American culture. As a result, you’ll find plenty of vividly coloured graphics in Pumpkin Smash, such as cheery jack-o-lanterns and some beautifully designed sugar skulls.

The reels are set before a traditional South American village at what appears to be the twilight hours. All of these visuals and the matching sound effects will fully immerse you into the atmosphere that Yggdrasil has created.

All of this action plays out over five reels and 20 pay lines. As with most Yggdrasil slots, winning combinations are formed from left to right across active lines. You can set the reels rolling for between 20p and £100 per spin, but remember, you need to stake at least 50p per spin to enter Mr Green’s Cash Race.

One of the most fun things about playing Pumpkin Smash is the bonus game. This special feature lives up to the name of the game as you’ll be required to smash as many pumpkins as possible as they pop up on the screen. These pumpkins hide free spins and multipliers so the more you get, the more you’ll win.

On top of this, three or more bonus symbols can appear on the reels at any time to trigger a special free spins round. Depending on how many special symbols you find, you could between seven and 32 spins in this round.

The Pumpkin Smash Cash Race will run at Mr Green from October 27th until November 1st.

There is no opting in to this promotion. Players are automatically entered into the race by playing the qualifying slot game during the promotional period.

All prizes paid out in this promotion are real money and are therefore free from any wagering requirements.

The minimum bet level required to participate in this tournament is 50p per spin.

Every qualifying spin has a chance to trigger one of the cash prizes.

All prizes will be paid immediately into winners’ accounts.