Feel the Power of 'The Highlander Cash Quickening' at Mr Green

Do you remember the 1986 blockbuster hit Highlander? This action-packed fantasy adventure starred Christopher Lambert, Clancy Brown and Sean Connery as immortal warriors embroiled in an age-old battle that spans centuries.

This epic movie has gained cult status among sword & sorcery fanatics and spawned a whole stream of sequels. Now Highlander has found an entirely new lease of life as a slot game from Microgaming.

Now casino fans can act out the antics of the immortal Scottish swordsman, Connor MacLeod as he battles his nemesis The Kurgan. The only difference here is that instead of winning a legendary power called ‘The Quickening’ as in the film, you’ll be fighting for a stash of quick cash.

This is The Highlander Cash Quickening promotion from Mr Green Casino. If you’re ready to join this battle then read on and we’ll tell you how to fight your way to the forefront of the cash prize draw…

The first thing you need to know is that all prizes in Mr Green’s Highlander Cash Quickening are paid out in the form of real cash and are free from any wagering requirements.

There are two parts to the promotion. The £20K Daily Draw- which will reward players every day spread out over the course of December and the £20K Main Draw. Here is the prize breakdown for the daily draw:

Then there is the £20,000 Main Draw. All rewards in this part of the promo will be credited to winners’ accounts by December 29th. Here’s what you could win: 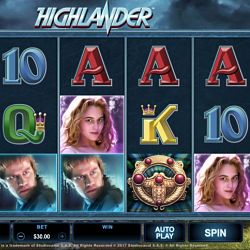 You have from 1pm on the 6th until midnight on the 20th of December to take part in both the main and daily £20K draws.

To receive the powers of the Cash Quickening every day during this promo period, all you have to do is play 10 real-money rounds on the Highlander slot at Mr Green. It doesn’t matter how much you stake on the game, as long as you spin the slot 10 times in a day, you’ll be in the running to win some Quick cash.

As for the £20K Main Draw, every £30 you wager on Highlander during the promotional period will earn you one entry into that prize draw which will take place on December 21st. There’s no limit to the number of entries you can accumulate and the more you collect, the higher your chances of being picked will be.

Microgaming’s design team was clearly in an adventurous mood when they came up with the concept for Highlander. Based on the 80s fantasy of the same name, this game take us on a trip back in time to the medieval Scottish highlands to take part in the timeless war between immortal enemies.

As you might have imagined, the reels are set before a misty backdrop of rural Scotland, complete with wild heather and rocky mountains. The reels themselves are decorated with traditional Celtic embellishments and filled with characters from the film as symbols. Standard card symbols make up the lower-value icons.

To earn entry into Mr Green’s prize draw you’ll need to play on Highlander’s five reels, three rows and 243 pay lines. By adjusting the coin size you can set your betting stake to an amount as low as 40p or as high as £30 per spin.

There are three brilliant bonuses to look out for here, including a free spins round with up to 20 freebies up for grabs. If the Sword Skill Bonus kicks into action you’ll be prompted to pick from three different Tartan Tiles to reveal a mystery cash prize.

Then there is the Battle Bonus. In this round you’ll come face to face with The Kurgan and given a selection of moves to defeat him. Move wisely enough in this combat and you could win a whopping 1,000X your betting stake.

The Highland Cash Quickening promotion commenced at 1pm on December 6th and will end at midnight on December 20th.

The promotion consists of 15 daily draws and one main draw at the end of the promotional period.

All cash prizes will be paid into winners’ accounts within 72 hours of the draws being held.

Each player is only entitled to win one cash prize throughout the promotion.

If the same winner is picked twice, a re-draw will take place to name a new winner.