The Snow Queen is dropping by Betfair Bingo for the rest of this week and sprinkling some of her magic on the site for all players. This is the Snow Queen’s Magic offer, a Bet 10 Get 5 deal on the popular Playtech slot.

The offer is incredibly simple and straightforward. Meet the staking requirements on Snow Queen’s Magic and Betfair will treat you to a £5 bonus.

This bonus will be credited to your account straight away and is valid for slot games only, with a 5X wagering requirement. You can put this bonus to good use on any of Betfair’s many amazing games such as Zeus God of Thunder, Cleopatra Plus, Kiss and Rainbow Riches Free Spins.

Taking part in the Snow Queen’s Magic promotion couldn’t be any easier. All you have to do is sign into Betfair Bingo, stake £10 or more on the game (which we’ll tell you all about in just a moment) between the 4th and 10th of December and you’ll receive your £5 slots bonus.

The bonus will be credited to your account immediately, free for you to spend on the slot game of your choice. 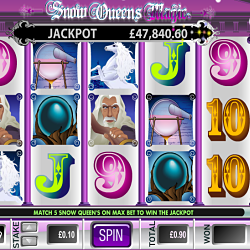 The Snow Queen is a collection of stories by Hans Christian Andersen in the 19th century. The tale spent many years as one of the lesser known fairytales by the iconic author until it found a new lease of life as the inspiration for the Disney blockbuster, Frozen.

Now the Snow Queen has taken on yet another new lease of life. Snow Queen’s Magic is a Playtech/Virtue Fusion game with an incredibly high progressive jackpot to aim for. This is the slot you’ll need to spin to get hold of your £5 bonus, and with so much on offer, you’re sure to have a great time doing it…

As you might have guessed from the name of the game, Snow Queen has a wonderfully wintery design, with symbols including ivory owls, unicorns, crystal balls and a white-bearded wizard. These symbols are set out before a beautiful backdrop of the Snow Queen’s icy palace surrounded by snow-covered mountains.

There are five reels and three rows to play with on this table and an adjustable amount of pay lines between one and nine. Bets can be placed for between 10p and £5 per spin.

The real prize in this slot is the progressive jackpot feature. This addition adds an interesting element to the game by dishing out some truly life-changing sums of money whenever five jackpot symbols show up at once.

The Snow Queen’s Magic promotion is open to all registered members of Betfair Bingo based in the UK and Ireland.

Players must stake at least £10 cash on Snow Queen’s Magic to receive the £5 bonus.

The promotional period will run from midnight on December 4th until 11.59pm on December 10th.

The £5 bonus is subject to a 5x wagering requirement.

All prizes will be paid out immediately after staking requirements have been met.