Celebrate St. Patrick's Day by Winning a Share of £10,000 at Mr Green Casino

It seems as though the team over at Mr Green Casino didn’t want to see the St. Patrick’s Day festivities to come to an end. They’re keeping the craic going by launching the £10K Super Heroes Tournament in association with developers, Yggdrasil.

The two-part promotion has £10,000 waiting to be won in both a leaderboard challenge and a prize draw. For your chance to come away with some of these hefty cash rewards, you’re going to need a little bit of St. Patrick’s luck and a whole lot of slot spinning skill...

Read on to find out how you can be one of the dozens of winners in this tournament.

As we mentioned earlier, the Super Heroes Tournament takes place in two parts. First of all, there will be a leaderboard for the top spinners and winners in the Super Heroes slot during the qualifying period.

This prize pool will be distributed among players who finish up in the top 50 leaderboard spots. Here is what each one will win:

If you don’t manage to make it into one of the top 50 positions, don’t worry- there’s still a chance to be a winner. The players who ended up in the top 200 on the board will be entered into a £2K raffle.

The cash prizes in this draw will be distributed to random players as follows:

If you like the sound of these real money rewards, keep on reading to find out how to take part in the tournament.

The Super Heroes slot tournament will be active at Mr Green Casino from the 17th until midnight on the 23rd of March. During this time, you don’t need to opt in or meet any staking requirements- simply sign into the site and start playing Super Heroes.

Your leaderboard position will be determined by the highest single coin win you make in the game on a spin costing at least 60p.

After the leaderboard positions have been locked and finalised, the top 200 players have 72 hours to return to Mr Green and opt in to secure their place in the Pick ‘n’ Click raffle. Each of these 200 slot spinners will be entered once before the draw is held on March 26th. 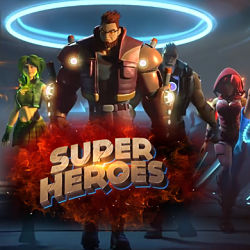 The slot itself, Super Heroes, is a five reel, 20 pay line title released by Yggdrasil in 2016. As you might have guessed from the name of the game, Super Heroes has a decidedly comic book feel about it, revolving around the six heroic main characters.

These animated superheroes acts as symbols on the reels and can make for some seriously impressive cash wins when they appear in a matching combination from left to right across the reels.

Even bigger wins are waiting to be won in the many exciting extra features. Keep your eyes peeled for the Free Spin symbol which can dish out between four and seven spins whenever it shows up three times or more on the reels.

Other bonus features in Super Heroes include Mystery Wins, Wild Reels, Random Wilds and multipliers which can climb as high as 5X.

The slot is playable from as little as 20p to as much as £100 per spin- but remember, you need to stake at least 60p on each spin for your score to count in the leaderboard challenge!

The Super Heroes Tournament is only open to players based in the UK. All UK-based Mr Green customers- new and existing- are welcome to take part in the promotion.

The promotion is active from the 17th until the 23rd of March. Only gameplay made with real money during this time, at a minimum of 60p per spin, will count towards leaderboard points.

Player’s leaderboard positions are determined by the highest coin win they make in any qualifying spin.

After 48 hours of the raffle coming to an end, all unclaimed prizes will be re-distributed among qualifying players who did not claim their prize.

All rewards in this promotion are paid out as real money and are therefore free from any wagering requirements.