How To Play: Marvel Slots 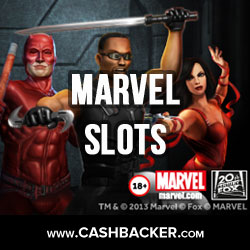 Confused By Online Slots? Here's Something For You To "Marvel" At..

The Marvel Superheroes unite to bring you a plethora of online slots games that'll grab you by the arm and throw you into a world of crime-fighting action and progressive jackpots venturing well into the millions!

From Iron Man to Blade, to The Incredible Hulk and The Avengers, whether you're a superhero fan or not you have to take your hat off to the guys at Playtech - makers of the superb Marvel Slots games gripping the nation. The suite of superhero slot games are all the rage at the minute and although they really need no introduction, here's an overview of some of the best features and games on offer...

Did You Know?
Cashbacker™ members get up to 20% back on anything they spend, every month, for life! Read more..

This is a bonus game included on all the Marvel Slots as standard. You don't need to do anything to enter it, it'll just pop up on your screen at any time whether you have a winning combination or not, however the more you lines you play and the higher your stake then the more chance you have of it appearing. Once it appears you are guaranteed a prize. There will be 20 squares turned over to start with and all you need to do is pick one. The square you pick will determine which jackpot you win. All jackpots are progressive and so continually increase until they are won, but they start off at different levels:

Fingers crossed for the jackpot game!

Although largely the same, there are a couple of differences between these two games - firstly, Iron Man is a 20-line slot game whereas Iron Man 2 comes in both 25-line and 50-line versions. Secondly, although both games have bonus rounds included, the Iron Man game has a Missile Attack bonus round where the objective is to shoot down missiles for extra cash. The Iron Man 2 game however has a Free Games round instead where you get free spins with increasing multipliers which are applied to your winning total!

The X-Men slot game also includes a Free Games bonus round except this time there are two modes - Heroes mode and Villains mode. The bonus round starts in Heroes mode which offers an unlimited number of free spins. Keep spinning and keep winning for as long as you can! But, reveal a Magneto symbol and you'll enter Villains mode where you'll only have 8 free spins left. All free spins are played according to the number of lines and wager placed on the spin that won entry to the free games round, so if you're on max bet you're on to a winner for sure!

Another bonus round included in the X-Men slot game is The X-Feature. Land any of the heros in the symbol locations on reels #2, #3 and #4 and get 5 times your total bet added to your winnings!

Trouble's upon us all when the Hulk shows his face, but you're safe in this slot game - because you're playing the Hulk! Enter the Smash Bonus Game and you'll have the chance to smash 3 out of 7 police cars to reveal cash prizes of between 1 and 8 times your bet amount. Once you're done there, it's time to smash some police helicopters! Pick one out of three to smash and you'll receive a multiplier which will be added to your cash won so far during the bonus round. If you're lucky enough to enter Hulk Rage mode, you'll smash all 7 cars and collect all the winnings before getting your multiplier - awesome ;)

Another great feature of The Hulk slot game is The Expanding Hulk Feature - land the wild symbol in the middle of reel #3 and The Hulk will take over the whole of the reel deeming every symbol to be a wild card. The remaining 4 reels will then spin twice over while you bank any winning lines. Land a wild symbol on reels 2 and 4 during the two spins and The Hulk will take over all three reels deeming all symbols on all three reels to be wild cards! The remaining 2 reels will then spin once more and you'll be in for a nice treat for sure!

Another classic and another many more ways to win! Land 3 or more Scatter symbols (a picture of the earth in this game) and enter the Free Games Bonus round where you'll have 12 free spins. During that round, reel #3 will be stacked with pictures of the Fantastic 4 super heroes. If all positions on that reel show the same hero, you'll enter an extra feature round depending on which character you uncovered:-

Mr. Fantastic: Awards you with 4 free spins where if a Mr. Fantastic symbol appears on any reel then all symbols on that reel will be treated as wild symbols.

The Thing: Awards you with 3 free spins where any time The Thing appears on a reel it will remain there for each subsequent spin and act as a Wild symbol.

Possibly one of the most understimated Marvel Superheroes, but who might just become your favourite. Cover reel #3 with Heimdall symbols and you'll enter one of two Free Games Bonus modes - the Jotunheim Free Games mode or the Earth Free Games mode. In either mode, reels #1, #3 and #5 are only 2 symbols high while #2 and #4 are 3 symbols high, and you'll receive unlimited free spins collecting cash as you go along. However, land two Heimdall symbols on reel #3 and you'll return to the main game, keeping your winnings of course :)

The difference between the two modes is that in Jotunheim mode the Laufey symbol will appear which acts as a Wild symbol and will freeze any winning combination it is involved in for one more spin, guaranteeing you at least a repeat win. In Earth mode the Destroyer symbol will appear and cover reel #5. It then blows fire over the remaining 4 reels and sets fire to several of the symbols. Land a combination on the burning symbols and the multiplier of the win will be doubled for each burning symbol participating in the combination!