The relative payout of online slots can be determined by the game's RTP (Return To Player). All slots have their own RTP, usually set to a maximum amount by the game developer to ensure it generates enough profit to cover their costs. Sometimes the RTP of a particular slot can also be controlled by the online casino hosting the game, to some degree, although the practice is frowned upon so be wary of any casino that is doing so.

The advertised RTP of a slot game can sometimes be found in the game's "info" pages, but often it is not listed at all. Some online casinos list the RTPs of all their games, but these are also often hidden away and difficult to find.

The online slots below don't feature jackpots so you can theoretically expect a RTP which is more representative of the advertised RTP. Note however that gameplay and big wins will still affect the overall RTP, and the RTP experienced may be lower or higher than that advertised.

The reels are filled with symbols like mermaids, dragons, sailing ships and other images which wouldn’t look out of place on a 15th nautical map. It’s the ship’s compass symbol you’ll want to look out for as this is the trigger for the bonus round which will reward you with between 10 and 50 spins. 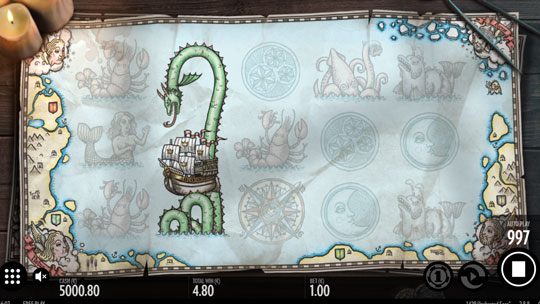 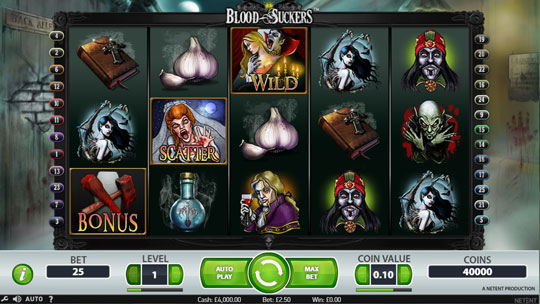 Launched in 2009, Blood Suckers is a spooky NetEnt slot. With its generous bonus features and notably high RTP of 98%, it’s easy to see why Blood Suckers has remained so popular over the years.

The five reels and 25 pay lines of Bloodsuckers can be spun for between 25p and £50. Winning spins are formed by matching combinations of the eerie symbols, which include vampires, garlic cloves, spell books and jars of potion. The vampire bride symbol acts as a scatter in the game and triggers 10 free spins when she appears three times or more on the reels.

Wolfpack Pays is a popular NextGen slot which you can enjoy at a number of casinos including Mr Green, Vera & John, InterCasino and Casumo. Playable from 40p to £80 per spin, this game stands out for its 97.75% RTP. Wolfpack Pays utilises a 243 ways to win format set before a backdrop of American mountains, woodland and rivers.

Instead of the usual bonus rounds, Wolfpack Pays gives one free spin after each winning spin. This can keep on going as long as you’re lucky enough to hit wins and two wilds will be added to the first two reels. 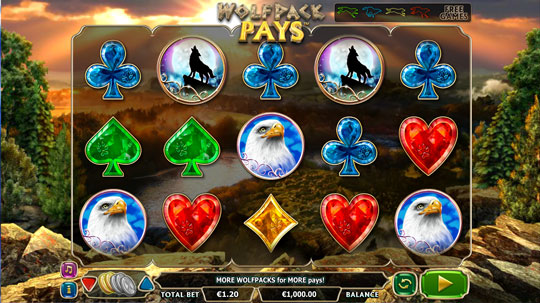 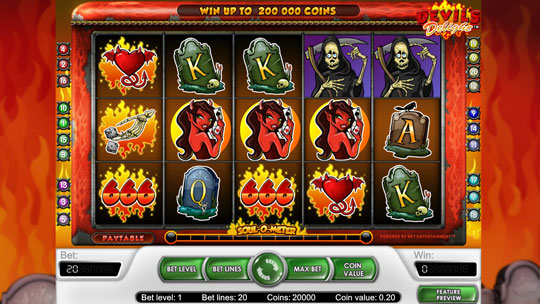 Devil’s Delight is a classic NetEnt slot game. Released back in 2008, this sinful slot has stood the test of time thanks to its excellent bonuses and impressive 97.60% RTP. There are five reels and 20 pay lines here, all filled with cartoonish symbols of devils, tombstones, skeletons and more.

By setting the coin and bet size, you can set a wager from 20p up to £200 per spin. As well as plenty of cash prizes in the base game, there are three bonus rounds in Devil’s Delight. Trigger these special features for free spins and multipliers up to 3X.

Simsalabim is a magical and mysterious slot by NetEnt with a 97.50% RTP- one of the best on the market. There are five reels and 25 pay lines in Simsalabim, all filled with symbols associated with classic magician acts such as top hats, wands, cards, locked chests a hypnotist and a magic rabbit.

The 25 reels in Simsalabim can be spun for between 25p and £250. There are two bonus rounds in this slot; the first is a traditional, scatter-triggered free spins round and the second is the Rabbit Bonus Game, a pick’em feature which dishes out mystery cash prizes. 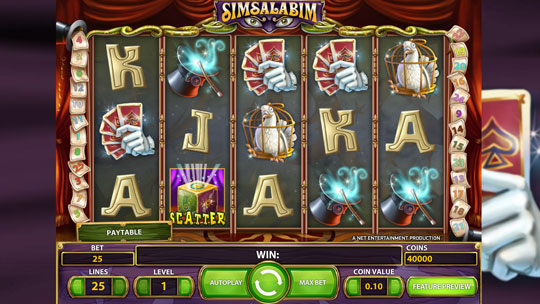 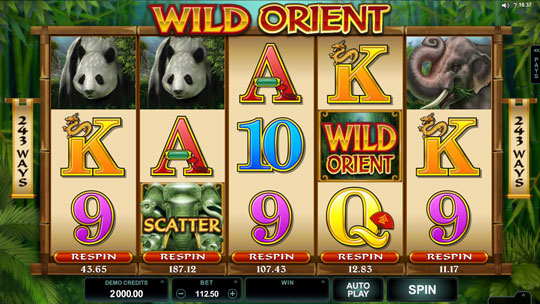 Launched in 2016, Wild Orient is an oriental themed offering from Microgaming which puts a unique spin on the 243-ways-to-win format. This game takes place deep in the rainforest and hands out plenty of cash prizes thanks to its 97.50% RTP.

There are five reels and 243 lines in this beautifully designed slot. The bamboo-framed reels feature images of Asian wildlife and tranquil, traditional music plays in the background. Spins can be made from as little as 25p or as much as £125 and there are 15 free spins with up to 3X multipliers on offer in the bonus round.

Although jackpots can skew the actual RTP significantly, many slots players are only in it for a major jackpot win. And with some seriously life-changing amounts of money to be won from a single spin, it's not difficult to understand why.

If you can feel a jackpot win coming your way, then the slot games below are the best payout online slots with jackpots, so you are still in with a chance of bagging a seriously big win, while theoretically getting more back for your money over time.

Cosmic Fortune is a NetEnt slot which whisks players away to outer-space for high prizes and fun gameplay. It is part of the MegaFortunes series and was the first NetEnt slot to feature five separate jackpots- three progressives and two statics. You can enjoy these jackpots and Cosmic Fortune’s 96.90% RTP at Casumo Casino.

The five reels and 15 pay lines of this slot can be spun for 30p up to £75. The game features a unique bonus called Free Falls which requires you to collect as many marbles as possible in a quest to hit the big bonus jackpot. 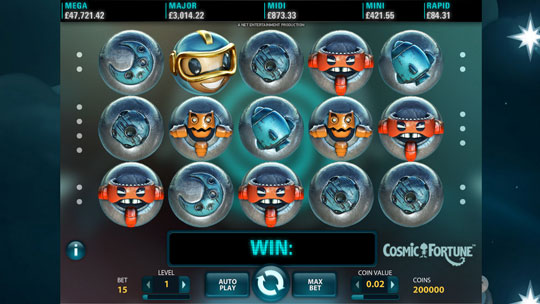 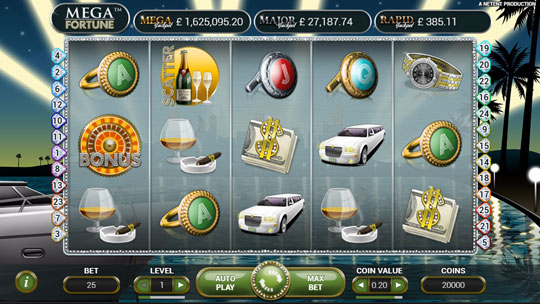 NetEnt’s Mega Fortune has gone down in history for handing out some of the biggest wins of all time since its release back in 2009. With a 96.60% RTP and progressive jackpot which currently stands at £1,117,643; this slot lives up to its sterling reputation.

The five reels and 25 lines of Mega Fortune can be spun for between 25p and £50. The generous free spins round features multipliers of 5X and the potential for huge cash wins. The jackpot can be won in the Wheel of Fortune bonus game which has made many millionaires over the years.

Divine Fortune is a NetEnt slot which is packed full of bonus features, progressive jackpots and boasts a 96.59% RTP. There are five reels and 20 pay lines in this game and you can spin them for 20p up to £100. The theme of Divine Fortune is Greek Mythology so expect to see lots of figures from ancient legend as you play.

You’ll find four bonus features here including Falling Wilds and Free Spins. The most significant bonus is the jackpot round as it’s here that you have the chance to land the top prize which currently stands at £84,850. 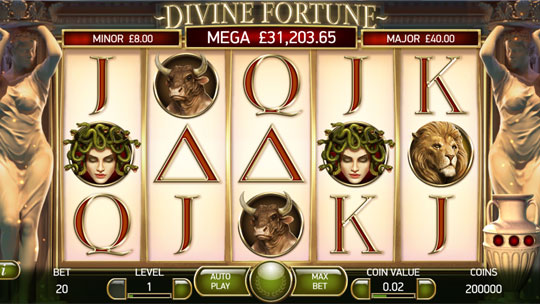 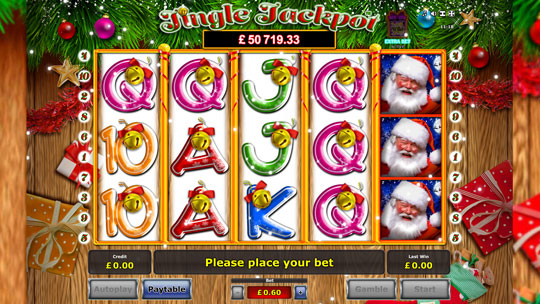 You can enjoy Christmas all year round with Jingle Jackpot, the festive-themed progressive slot from Greentube/Novomatic which is available at Casumo Casino. Jingle Jackpot has five reels, 10 pay lines and the option to pay extra per spin for the addition of stacked wilds and multipliers. The design of this game is totally seasonal with symbols such as Santa, presents, baubles and holly.

There are also lots of mini-bonuses scattered throughout Jingle Jackpot. Each of these bonuses offers something different, such as nudged reels or duplicated symbols. The progressive jackpot is awarded at random and at the moment is £50,243.

Mega Fortune: Dreams is the updated version of NetEnt’s iconic Mega Fortune. This new, improved sequel has all the best aspects of the original game, including the gigantic jackpots and glitzy theme, but is even sleeker and smoother. The RTP is 96.40%.

The game has 20 pay lines, five reels and is playable from 20p to £80 per spin. The reels are filled with champagne, diamonds and other images of luxury lifestyle. The three jackpots are above the reels so you can keep an eye on their current amounts. These jackpots can be won in exciting ‘wheel-of-fortune’ style bonus games. 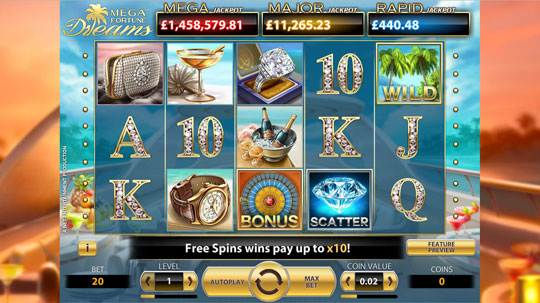 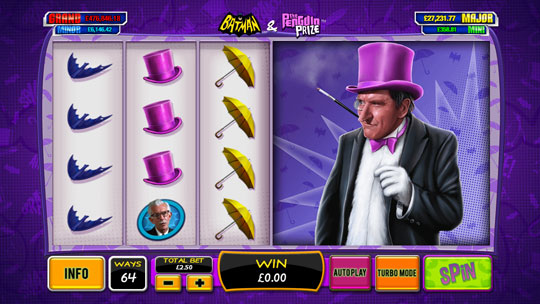 Playtech has brought back the legendary characters of the original 1960s Batman TV series for its progressive slot, Batman & the Penguin Prize. This slot will thrill DC Comic fans with its cartoonish, retro design. The slot starts off with three reels and 64 pay lines but benefits from a series of bonuses which unlock up to 4,096 ways to win.

You can spin this slot for between 25p and £50. The most exciting part of playing Batman & the Penguin Prize is the fact that one of four progressive jackpots can be randomly triggered at any time during gameplay.

RTP (Return to Player) is the payout percentage of a casino game, most commonly seen in video slots. It is the average amount of winnings returned to players based on the total amount wagered on that game. For example, a slot game which is advertised as having a RTP of 95% will theoretically pay out £95 of every £100 wagered on it.

It is important to note however that the RTP is a theoretical percentage based on the total amount wagered on the game over the long term, not per £100 or per hour. For this reason, a player shouldn't expect a slot game to pay out £95 for every £100 they wager on the game, and the actual return witnessed over a single player's session may be much lower, or higher, than the advertised RTP.

There are many factors which affect the actual RTP in a single player's session. Firstly, as it takes into account all other players' wagers too, any jackpot wins or other big wins will affect the overall RTP. Gameplay also has an affect on the RTP of a single session, particularly where the player is offered the option of nudging or holding reels - the outcome of which can dramatically alter the chance of a win.

That being said, RTP is viewed by many online slots players as one of the most attractive features of a slot game, on the understanding that the higher the RTP the more they will theoretically get back in winnings over time.