Win Tickets to the World Cup Final in Brazil! 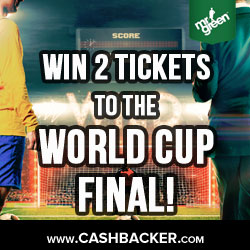 Win A Trip Of A Lifetime - 2x Tickets to the World Cup Final in Brazil!

After four long years of waiting, the world cup is finally here!

32 nations will compete until they are narrowed down to two, as 22 players take to the pitch to battle it out for the world cup and you could be there watching the legendary match!

Play the match winning Football Star slot via the web or alternatively by mobile or tablet. Hear the crowds roar and chant as you spin your way to winning up to 105,000 times your bet! With 243 win lines and more than 40 wild symbols paying guaranteed cash prizes you could be in with a win big enough to pay for your own tickets, several times over (but watch out for the referee)!

For every £20 wagered on the game, you will earn one football star ticket and be entered into the prize draw. Note that wagering £20 doesn't mean losing £20 - as with payout rates around 95% the theoretical return on a wager of £20 is £19 - so it could only cost you £1 - and, by claiming our exclusive cashback you'll also get up to 20% back on net losses!

Keep your fingers crossed on 12th June when they pick the lucky winner to watch the live final!

Simply head over to Mr Green now and visit the "Promotions" tab for further details.

Mr Green is giving one lucky winner (plus a guest) the chance to fly over to Rio De Janeiro, Brazil for the international football event that will take place on Sunday 13th July 2014.

Your package will include a pair of tickets to the final at the Maracanã Stadium, return flights from Heathrow via Lisbon to Rio De Janeiro from Thursday 10th-17th of July.

Private transports to and from the hotel as well as to the stadium will be provided, as well as accommodation at the Copacabana Hotel on the beach front.