They say ‘what goes around comes around’ and that goes for cash too, or at least it does with the Cash Karma promotion from Mr Green.

This cosmic casino offer rewards players with massive cash rewards in exchange for spinning the reels of the Nirvana slot. That sounds like the kind of karma we could get used to!

Are you ready to be transported to this heavenly cash hand-out? If so, read on for more information.

Mr Green Casino has built up a large prize pool to be divided up among 10 lucky spinners of Yggdrasil’s Nirvana slot as follows:

These prizes will be given out in the form of real money and free from all wagering requirements. They will be handed out to winners instantly within the game.

For your chance to be one of the lucky winners and bag yourself a nice bit of cash, make sure you play Nirvana at Mr Green between the 3rd and 5th of March.

Any amount of real money spent on the slot during this promotional period can trigger a bonus chest reward with one of the above cash amounts hidden inside.

The likelihood of you triggering one of these chests is determined by the amount you stake on Nirvana. This means that the bigger you bet, the better your chances of winning will be. 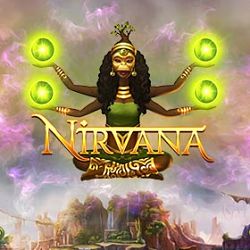 Nirvana is a peaceful, paradise-themed video slot by Yggdrasil that stands out for its imagery, gameplay action and excellent bonus feature. Treat yourself to a few spins on this game and you’ll feel like you’re on cloud nine.

Everything about this slot revolves around mysticism and natural magic. Despite being based on Nirvana, which is the Sanskrit word for heaven and is an important part of Buddhist belief, the game doesn’t seem to be inspired by any particular culture or religion.

Three mysterious goddesses oversee the action on the reels which are filled with magical animals like horned rabbits, phoenixes and bejewelled snakes as well as glittering gemstones.

The five reels and 20 pay lines can be played for as little as 20p or as much as £40 per spin. Glowing flowers are the triggers for free spins round. This bonus is boosted by the addition of wild reels which massively increase the chances of landing on a winning combination.

The Cash Karma promotion is active from the 3rd until the 5th of March. During this time, all registered members of Mr Green Casino can take part in the offer.

Only gameplay made with real money in the Nirvana slot game during the promotional period qualifies players to win one of the cash chests.

All cash prizes awarded in Nirvana will be credited to players’ account immediately and free from any wagering requirements.

There is no minimum bet size required to take part in the Cash Karma Race.