Win an Exclusive Trip to Japan at Mr Green

Tokyo is well known for being among the most unique and incredible cities on earth. Nowhere else in the world is steeped in such a mix of historic tradition and futuristic technology, so it’s easy to see why Tokyo is at the top of so many avid travellers’ bucket lists.

Now, thanks to Mr Green Casino, you and a guest of your choice could be whisked away to the ‘Land of the Rising Sun’ for a once in a lifetime trip, during which you can explore all that the city has to offer.

In true Mr Green style, the prize in this promotion is a genuinely jaw-dropping one- complete with experiences and memories that will last a lifetime. To get involved in this campaign, all you have to do is play the site’s latest slot title- Emojiplanet.

Keep on reading to find out more...

The amazing prize package in this promotion includes return flights for two from Europe to Tokyo (including airport transfers), five nights at the 4-star Hotel Shinjuku Granbell, breakfast every morning and £500 spending money.

Before and during the Tokyo trip, the winner will receive on-hand support from dedicated travel staff. One of the most exciting parts of the holiday is the two-hour private workshop. Here’s what you can expect to learn from that session:

Keen to find out how you can get your hands on this Japanese adventure? Here’s exactly what you need to do...

Head over to Mr Green anytime between the 3rd and 9th of August (finishes at midnight) and play the casino’s exclusive slot game, Emojiplanet.

Unlike many other promotional giveaways, this isn’t a leaderboard challenge or a random prize draw; instead, the winner will be determined by ‘wager to win’ percentages. That means that the player who, at the end of the promotional period, has the biggest bet v win ratio on Emojiplanet will be the one to walk away with the holiday to Tokyo and full Samurai experience.

Make sure you keep a close eye on Mr Green’s promo page as you compete for the prize, as the leaderboard will be updated every day, with the scores of the top players displayed on-screen. The winner will be contacted after the promotional period has come to an end. 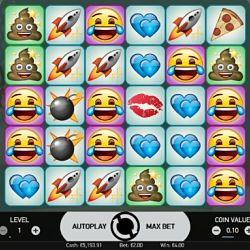 Emojiplanet is a NetEnt creation which you can only enjoy at Mr Green. With an avalanche reels structure and five exciting mini games, this slot can secure you some big cash wins and boasts a return to player rate of 96.4%.

As you might have guessed from the name of the game, Emojiplanet is entirely based on emojis- the tiny cartoon characters most of us use every day during digital conversations. Some of the symbols you’ll find on the reels include love hearts, bombs, pizza slices, lipstick kisses and classic smiley faces.

There are five reels, six rows and no pay lines in Emojiplanet. Instead of fixed lines, NetEnt has opted for the increasingly popular avalanche reels set up. This means that instead of spinning, symbols in this game cascade down from above and disappear when a winning cluster has formed.

You can give Emojiplanet a go for as little as 20p or as much as £200 and there’s no minimum bet size required to take part in Mr Green’s Japanese giveaway.

As you play, you’ll see five emoji meters to the right of the reels. Every time a certain emoji symbol forms a winning combination, its corresponding meter will have one symbol added to it. Fill a meter with 12 emojis and you will trigger one of five generous bonus rounds:

The Japanese holiday for two campaign commenced at Mr Green on August 3rd and ends at midnight on August 9th.

Only real money gameplay on the slot, Emojiplanet, during this promotional period will count towards the offer.

The player with the highest bet/win promotion on Emojiplanet during the promotional period will win the prize.

If the winner cannot be contacted by casino staff within 48 hours of the promotion coming to an end, the prize will be allocated to the next highest player on the leaderboard. For this reason, all participants must ensure that the site has their correct, current contact details on file.

The Tokyo holiday must be booked within six months of the end of the promotional period.

The winner may choose a cash alternative equal to the price of the holiday minus agency fees.