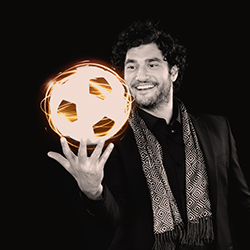 The World Cup is an event that takes the entire planet by storm, unifying everyone in good natured patriotism, even those who don't regularly watch, nor care for football. We can guarantee it'll be what everyone will be talking about, and whether you watch it at home, or in a pub somewhere, there's no denying that everyone will be watching!

However, over at InterCasino, you can win a chance to take a step above the rest and win tickets to go see it live in Moscow!

Much like The World Cup itself, they'll be running a tournament all through the month of March to get a lucky few some wonderful prizes, as it's not just the tickets that are up for grabs!

You can win anything from signed football memorabilia, to some extra cash so even if you don't make the cut for the game, you'll still feel like a winner!

The tournament will consist of three weekly qualifying rounds, all of which will give players points which, with enough, will see them qualify for a fourth and final tournament made up of the highest scorers.

All you have to do is deposit £20 or more during the round, then head over and play your favourite slots or table games (Live Dealer included) and you're on your way.

By making your way up the leaderboard, you'll be on the receiving end of some champion bonuses, from an extra £5 all the way to a whopping £500!

The winner of the final tournament will win the VIP package to Russia, which not only includes 2 tickets to the England vs Belgium game, but travel and accommodation at the Radisson Kaliningrad hotel.

The promotion is comprised of three main Qualifying Rounds open to all players, with the addition of an extra Final Round open to a limited number of finalists, as mentioned below:

In order to participate, players must make a single deposit of £20 or more as well as make cash bets on the specified games.

Bonus prizes are issued as generic bonuses playable on any games, with 20x wagering requirements and 60 days to complete those requirements.

Players who earn a minimum of 15,000 points during any qualifying round will be invited to participate in the final round, in addition to receiving the respective bonus prize of that particular round.

The Final Round is a leaderboard promotion, where players are ranked in order of the amounts of points collected during this promotion period.