Only the bravest slot spinning warriors out there will come away as victors in Mr Green’s Viking Runecraft Cash Battle- are you up to the challenge?

This two-part promotion revolves around the epic, battle-themed slot game Viking Runecraft and will be rewarding the most successful players with a share of £7,000 cash. Keep on reading if you’re ready for battle.

The Viking Runecraft Cash Battle is split into two halves; The Mission and The Cash Drop. Don’t worry, we’ll tell you all about each part of the offer in just a moment, but for now here is exactly what you could win...

The Mission part of this Mr Green giveaway is a leaderboard challenge with a £4K cash prize pool. The following prizes are waiting to be won by each player who finishes up in the top 25 of the leaderboard:

Then there is the Cash Drop, which is a random prize draw with a £3K prize pot up for grabs for three lucky winners:

All of the cash prizes won in both The Mission and the Cash Drop will be paid out in the form of real cash within 72 hours of the promotional period coming to an end. Since these are real money rewards there will be no wagering requirement to play through, the funds will be yours to withdraw immediately. 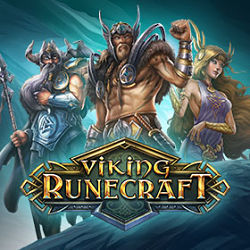 The Viking Runecraft Cash Battle will be open to all members of Mr Green casino between April 27th and May 4th. The Mission part of the promotion requires you to collect as many High Paying symbols and Feature symbols on Play ‘n Go’s Viking Runecraft slot as possible.

The more of these special symbols you land when you play the game with real money, the higher up the leaderboard you’ll climb. The final leaderboard positions will be announced on May 5th and you’ll find out whether you’ve managed to bag one of those incredible cash prizes.

As we mentioned earlier, the Cash Drop is a random prize draw. To enter yourself into the runnings for that £3K prize pool, simply play at least 30 rounds of Viking Runecraft at a minimum of 10p per spin.

Every 30 rounds you play will earn you one place in the draw, so keep on spinning to boost your chances of being named one of the lucky winners.

The Viking Runecraft Cash Battle will be active at Mr Green Casino from April 27th until May 4th.

To enter into the promotion, players must play the qualifying slot game, Viking Runecraft, with real money during this promotional period.

Players must play at least 30 rounds at 10p per spin to enter into the Cash Drop.

Players must trigger the in-game high paying symbols and special feature symbols to earn leaderboard points for The Mission.

All cash prizes will be paid into winners’ accounts within 72 hours of the promotional period coming to an end.