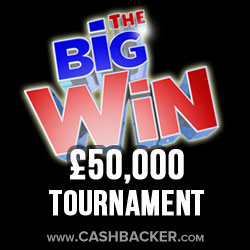 Through March to June, St.Minver gaming sites are joining forces to bring players a knock-out tournament with never-seen-before trivia and casino games challenges broadcast LIVE on the internet, with a £25,000 grand prize and £25,000 to pick up on the way!

UPDATE (22nd May): Although the preliminary rounds and semi-finals are over there is one more spot up for grabs which will accelerate you directly to The Big Win Grand Final - bypassing the semi-finals automatically! Read on..

Last Chance To Place In The Final - The Big Win Wildcard

Simply accumulate as many tickets as possible between 23rd May - 5th June and on Friday 7th June a winner will be chosen at random to win £1,000 and progress straight to the £25,000 grand final! The more tickets you earn, the more entries into the draw you'll get!

To get tickets simply play any game at either of the gaming sites below and for every £10 wagered you'll receive 1 ticket whether you win or lose!

The four finalists (three semi-finalist winners and one Big Win Wildcard winner) will go head-to-head at The Big Win Studio in Maidstone England (travel and accommodation expenses will be paid for) and will compete in various challenges in order to accumulate points. The contestant with the most points at the end of the game will go home with £25,000 in cash!

The challenges will include trivia questions as well as red/black and even/odd roulette bets, blackjack, heads/tails games and high/low games - much the same as the semi-finals. If you've only just tuned in and have missed the live broadcasts of the semi-finals so far then the third semi-final will be broadcast on Friday 31st May at 8pm (GMT). Be sure to tune in even if you've not earnt tickets for it because it really is a hoot - plus, you'll know what to expect for when you do secure your place in the Grand Final!

All live broadcasts are aired on the internet - simply visit any of the gaming sites below and click on The Big Win banners which you'll also find in the "Promotions" section. A link to watch The Big Win Live Show should be there right in the middle of the page :)

If you've not been chosen for any of the semi finals, or aren't really interested in competing, you've still got another chance to win a share of £1,000 before the last semi-final on 31st May.

Simply deposit and play a minimum of £10 at any of the gaming sites below and then correctly guess who will win the semi-final to win a share of the £1,000 cash. Once you've played your £10, you'll need to submit your vote on The Big Win promotions page in the respective gaming site of your choice.

Whether you've already tried your luck at the semi-finals, or are going for the The Big Win Wildcard, we'd love to hear from you - comment below!