Be a Winner in Mr Green's Golden Monkey Cash Race

Take a trip back in time to ancient China to play Mr Green’s latest promotion, the Golden Money Cash Race. By playing the mystical slot game Legend of the Golden Monkey (which we’ll tell you all about in a moment) you could be randomly rewarded with magical cash prizes.

The rewards dished out with Mr Green’s Golden Monkey promotion are as follows;

The East Asian jungles that this promotion whisks you away to might be hot and steamy, but these rewards come in the form of cold, hard cash which means there are no wagering requirements attached.

In addition to the promotional prizes waiting to be won at Mr Green, remember you’ll be playing for incredible amounts of cash in the game itself. Legend of the Golden Monkey is filled with bonus features and you can win high prizes by landing on winning combinations of symbols.

So what are you waiting for? Here’s what you have to do to get involved with this Mr Green exclusive giveaway.

All you have to do to win one of those massive cash stashes is head over to Mr Green casino and start playing the slot, Legend of the Golden Monkey between the 2nd and 4th of June.

If you’re lucky enough to be a recipient of a random reward your account will be credited instantly-there’s no monkeying around.

One thing to remember is that your chances of triggering a cash prize are proportional to your wager. The bigger the bet you place, the higher your odds will be. But what about the game itself? Read on to find out all about it.

Legend of the Golden Monkey 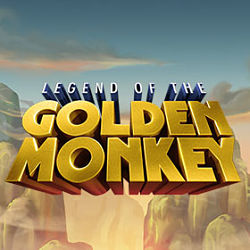 This Yggrasil slot is steeped in the ancient myths and legends of the orient. It is full to the brim with extra features including sticky wilds, countdown wilds, free coin bonuses and free spins.

Legend of the Golden Monkey is based on the story of Sun Wukong. In Chinese folklore, Sun Wukong is the king of the monkeys. His legend can be traced back over centuries and he features heavily in Taoist belief.

As a result, the imagery in this game has a strong Chinese feel. Symbols on the reels include crowns, bottles of magical elixir, shields, scrolls and jewel-encrusted goblets. These symbols are laid out across five reels and 25 pay lines which can be spun for between 25p and £125.

Bonus features include sticky wilds and countdown wilds which appear on the third reel and stay fixed in place for a random amount of spins.

The Golden Monkey bonus can be triggered at any time. When it does it will transform any symbols on your reels into the one next to it with the aim of forming more winning combos.

Then there is the Treasure Chest symbol. When this chest of sparking jewels appears on the fifth reel during the base or bonus game you will be treated to up to 1,000 coins.

Speaking of free spins, this feature kicks into action whenever three or more free spins symbols show up anywhere on the reels. You can choose from three different modes with this unique bonus, each of which provides multipliers and enticing amounts of spins.

The promotional period for the Golden Monkey Cash Race runs from the 2nd until the 4th of June. During this time, every registered member of Mr Green is welcome to get involved.

All cash prizes from both the promotion and the slot game will be credited to players’ accounts instantly.

Only real money gameplay on Legend of the Golden Monkey counts towards the Cash Race.

By playing with real money on this game, players immediately qualify for the Cash Race.

Chances of triggering a cash prize are proportional to a players’ bet size.