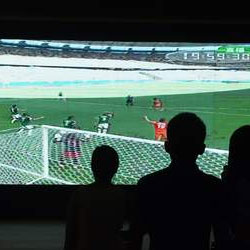 The FBI has arrested 8 people accused of operating an illegal World Cup betting ring, and who have suspected links to the 14K Triad chrime syndicate.

The accused booked three high-roller suites at the Caesar's Palace casino in Las Vegas where they ordered a mass of electronic equipment including computers, monitors, TVs, and DSL boxes prompting suspicion from Caesar's Palace employees who subsequently called in the FBI.

Among the accused is Wei Seng Phua aka Paul Phua, a well-known poker player, who is also a suspected organised crime syndicate member.

Agents have said that a laptop was found during the bust containing records of illegal wagers placed during the FIFA World Cup 2014 amounting to many millions of dollars. The DSL boxes were allegedly used by the group to monitor and place bets in oversees computers.

The group has been under surveillance for some time following other similar charges - Phua was arrested in Macau in June but posted bail and fled to Las Vegas.

A preliminary hearing will take place on 4th August and Phua must post $2m cash bail as well as wear a GPS monitoring device and surrender his $48m private Gulfstream jet as collateral.