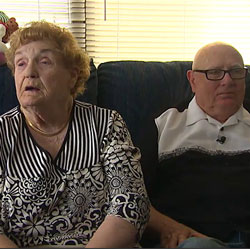 An elderly couple from Washington, USA got more than they bargained for after they believe they may have been followed home following a $500 cash win at the Emerald Queen Casino in Tacoma.

Jim and Betty Lilja returned home on Friday night when they were approached by a 20-something man who threatened to shoot the couple if they didn’t hand over their money.

Frequent casino-goers, Mrs Lilja had won a slot jackpot and had reason to believe they could have been followed by the man who assumed they were easy targets. The savvy gamblers were able to escape as the robber checked their bedroom, leaving them alone in the living room. Mr Lilja was able to use his car key to switch on his alarm which subsequently scared the intruder into leaving.

Emerald Green vowed to check their security footage in order to determine whether the young man could have been present throughout their winning streak.