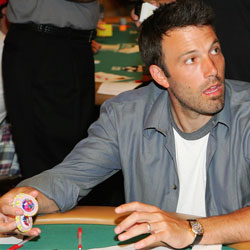 What would Bruce Wayne say? It seems Ben Affleck has got himself into a spot of trouble as the Hollywood Reporter revealed the actor has a lifetime ban from the blackjack tables of the Hard Rock Casino in Las Vegas.

Accompanied on a trip by wife Jennifer Garner on Tuesday, he was approached by security on suspicion of counting cards. A source reported that security had approached the 41 year-old for being “too good at the game”.

Although it is not an illegal act in Las Vegas casinos, it is looked down on. The actor was allowed to play other games, and the hotel fetched the couple a car. This is not his first offence however as Affleck had another Hustle moment back in 2001 when he won $800,000 on the blackjack tables in the very same casino.