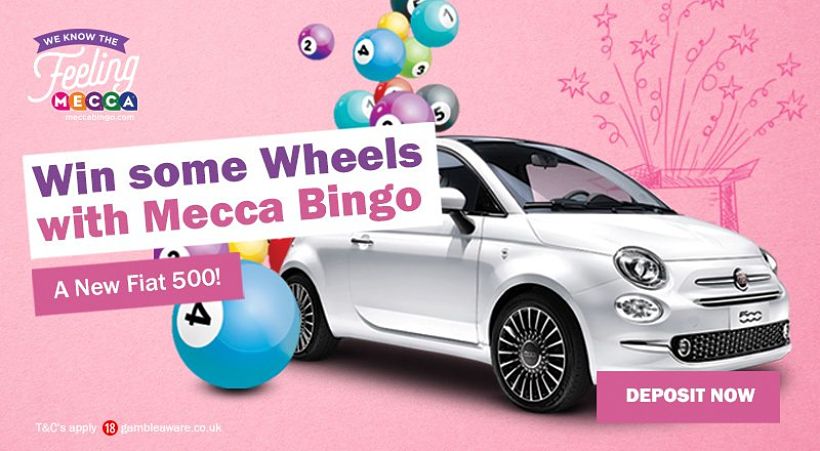 The team over at Mecca Bingo must have caught a serious case of March Madness as they’re giving away some of the most crazily generous prizes we’ve seen in while with their latest promotion.

The March Madness offer will be taking place all month long and broken down into four weekly segments. Each week will begin with a bingo game which dishes out some truly jaw-dropping rewards including spa days and a brand new car.

There’s plenty to get excited about this March at Mecca, so sit back, sign in and start enjoying this incredible giveaway.

If you get involved with the March Madness promotion, you will be invited to the free private bingo sessions taking place every Monday night between 6pm and 7pm.

All players in this session will be allocated an equal amount of cards so that everyone has the exact same chance of winning- as if the game wasn’t exciting enough! For the first three weeks of March, the prize will be a whopping £500, but in the final week things really get kicked up a notch...

This very special hour-long event will be broken down into 10 separate games where the following prizes will be scooped up:

Love the sound of those astonishing prizes? Now all you need to do is follow a few simple steps to play March Madness.

First of all, sign into your Mecca Bingo account or register for one right now through Cashbacker. The promotion comes to an end on March 26th, so you have until then to create your account.

Then opt in to the offer by entering the relevant weekly code in the bingo lobby. The bonus codes and dates for each one are:

Once you’ve opted in, you have until the following Monday to spend £20 of real money on bingo tickets at the site.

Whether you spend this qualifying stake on the website or through the Mecca Bingo app, you will automatically be involved with March Madness and invited to the Monday evening free game.

All registered members of Mecca Bingo, new and existing, are welcome to take part in March Madness and play in the Monday night games as long as they reside in England, Scotland or Wales.

The promotion is open from February 28th until March 26th. Players must opt in with the weekly bonus code and spend £20 of real money on bingo tickets during this time to join in.

In the event of more than one winner sharing the top prize in the special games, the prize will be split evenly between them. Physical prizes will be replaced with a cash alternative and shared equally between winners.

Winners of tangible prizes will receive their rewards within 28 days of the final game taking place.