Right now there are £10,000 worth of cash prizes waiting to be won in the latest of Gala Bingo’s incredible prize draws.

Take part in the brilliant bingo site’s £10K Cash Draw and you could become one of 500 lucky winners, simply for playing at one of three ancient-world themed slot games.

You already know that there will be 500 winners in this Gala Bingo promotion, but how much could each player win? Well, here is what is on offer for each and every one of the lucky winners of the £10K Draw...

Remember, these prizes are paid out in the form of real money which means there will be no pesky wagering requirements or rollovers attached. As soon as your reward has been credited to your account it will be yours to withdraw!

All winners will receive their cash prizes no later than 6pm of August 16th.

The £10K Cash Draw will be active at Gala Bingo from the 7th until the 13th of August.

For your chance to win one of those cash sums, you’ll need to sign into the site any time between these dates, and opt in to the offer on Gala’s promotions page. After opting in, every £10 you spend on the following slot games

...will earn you one entry into the prize draw.

If you fancy earning double entries for the amount of money you spend, stick exclusively to the game, Sphinx Wild, where you can earn two prize draw entries for every £10 you stake.

The three IGT slots that you can play to qualify for this prize draw all have an epic, fantasy feel to them. Here’s what you can expect from each one. 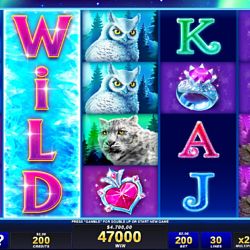 The first game giving players a chance to win one of Gala’s astonishing cash prizes is Icy Wilds. This game is set deep within a frozen forest and will thrill you with its shiny, shimmering graphics.

All of the snow and frost-themed symbols play out on a set of five reels, four rows and 50 pay lines. There are plenty of bonuses to be triggered here, for example, a polar bear icon on the first, third or fifth reel will award between 10 and 45 free spins.

Next up, take a trip deep into the ocean to spin the reels of King of Atlantic. This oceanic slot game revolves around the underwater realm of Poseidon; the Greek god of the sea.

With a theme like this, it comes as no surprise that gameplay is all smooth sailing, with symbols on the reels including red-haired mermaids, dolphins, crowns, jewels, harps, seashells and Greek amphora jugs.

You can play King of Atlantis for as little as 40p or as much as £80 per spin. Keep an eye out for the Poseidon free spins symbol which dishes out eight free spins and turns up to four reels into sticky wilds. 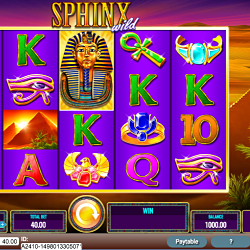 If all of this ice and water has got you feeling chilly, give Sphinx Wild a go. Set in the scorching deserts of exotic Egypt, this is the slot which will give you twice as many prize draw entries for each £10 you spend.

Symbols in Sphinx Wild all relate to the majesty and mystique of ancient Egypt. They include ankh crosses, scarab beetles, golden rings, the eye of rah and the Egyptian dog god; Bastet. All of these symbols are laid out across five reels and 40 pay lines which you can put into motion for between 40p and £400 per spin.

One of the highlights of the game is the free spins bonus which is triggered whenever three or more ‘desert scene’ symbols appear on the reels. This feature comes with an array of spins and multiplier combinations and gives you the chance to choose the one which catches your eye the most.

This promotion is open to all Gala Bingo customers between the 7th and 13th of August.

Only players who opt in and meet the entry requirements during the promotional period will be entered into the prize draw.

Prize draw entries are made automatically upon meeting the promotion criteria.

There is no upper limit to the amount of prize draw entries each player can earn.

The £10 stake is cumulative, so it can be made up of multiple small stakes.