Play Deal or No Deal: What's in Your Box at Mecca Bingo for a Share of £2.5K

Deal or No Deal has gone down in history as one of Channel 4’s most successful ever game shows. This heart-racing game of chance, which has been presented by Noel Edmonds since 2005, gives contestants the chance to win life-changing amounts of money by picking from 22 mystery boxes.

In fact, Deal or No Deal is such a huge hit that it has even inspired its very own slot game; Deal or No Deal: What’s in Your Box. If you’re a regular slot spinner, you’re probably already familiar with this popular game; if not, don’t worry we’ll tell you all about it.

The reason we’re talking about Deal or No Deal: What’s in Your Box is that this week, Mecca Bingo has a guaranteed £2,500 waiting to be won by the players brave enough to take on The Banker in this game. Read on to find out more.

The team at Mecca Bingo must be feeling pretty generous as every single player who meets the qualifying requirements on Deal or No Deal: What’s in Your Box will take home an equal share of a £2,500 prize pool.

This means that the exact amount you win depends on how many other players get involved with this promotion.

If this guaranteed bonus prize wasn’t enough to entice you into giving this slot a go, remember that Deal or No Deal: What’s in Your Box also has some incredible cash wins and progressive jackpots up for grabs which we’ll tell you about in more detail in just a moment. First though, here’s how to get your hands of your share of the £2.5K.

The Deal or No Deal bonus giveaway will be taking place at Mecca Bingo between the 22nd and 28th of May, and every member of the site is invited to get involved.

All you need to do is head over to Mecca Bingo, enter the code DEAL in the ‘Promotion Code’ box under the ‘My Bonuses’ section of the site. Once you’ve entered the code, deposit and stake £10 on Deal or No Deal: What’s in Your Box.

Then all that’s left to do is enjoy this great game and wait for your share of the bonus funds to be credited to your account within one week of the promotion coming to an end.

Deal or No Deal: What’s in Your Box 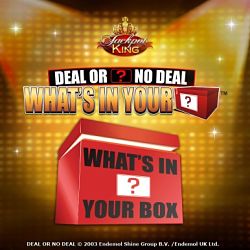 This exciting Blueprint Gaming slot is, of course, based on the long-running TV show and gives each and every player the chance to step up to the stage and give the infamous Banker a run for his money.

The theme will be familiar to anyone who has watched the programme before. The nicely designed symbols on the reels include notebooks, mugs, envelopes, telephones and those iconic Deal or No Deal boxes. The top playing symbol is the show logo itself.

All of this imagery is laid out across five reels and 20 pay lines which can be spun for as little as 20p or as much as £500.

One of the most exciting elements of playing Deal or No Deal: What’s in Your Box is just how jam-packed full of bonus features it is. At any random time during gameplay, the telephone could start ringing- when you hear that shrill ringing and see the game logo pop up on screen you’ll know you’re in for an exciting bonus, including:

Just like the game show itself, Deal or No Deal: What’s in Your Box provides players with plenty of opportunities to hit the big time. There are three different progressive jackpots to play for here.

All of the ever-increasing, randomly triggered jackpot amounts will be listed at the top of the reels throughout, so you can always see the sum.

So, if you’re ready to step up to the challenge and reveal what cash sums are hiding in your box, make your way over to Mecca Bingo today.

The Deal or No Deal: What’s in Your Box promotion will be taking place at Mecca Bingo from the 22nd to the 28th of May. All players based in England, Scotland and Wales are welcome to take part in this offer.

Players must opt-in using the promo code and stake at least £10 on the qualifying slot game to receive a share of the £2,500 bonus.

All bonus funds will be credited to players’ accounts within one week of the promotional period coming to an end.

The funds have a 20X wagering requirement attached, this must be played through before money can be withdrawn.