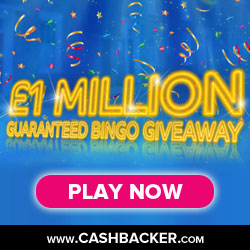 There aren't many opportunities like this, so hurry before it's too late! This one-of-a-kind promotion is on at Gala Bingo, Bucky Bingo and Sky Bingo so you have your choice of where to play.

What's more, if you're a Sky Bingo player, at the end of the promotion one lucky player chosen at random will win a Vauxhall Adam in a colour of their choice, worth £13,890!

For every £5 wagered on bingo during the promotional period at either Gala Bingo, Bucky Bingo or Sky Bingo you'll earn one entry into the prize draw. Plus, you'll earn DOUBLE entries on Sundays, and TRIPLE entries on Tuesdays!

Usual bingo rules apply, so you'll still pick up the usual bingo prizes in the process. The more you play the more chance you have of winning the prize draw.

The prize draw consists of 4 "mini" cash prize draws totalling £1,000,000, and each draw is made up of smaller cash prizes. The draws will take place as follows:

Bucky Bingo Players - the promotions is valid on any bingo game in any Bucky Bingo room.

Sky Bingo Players - the promotion is valid on any bingo game or side game in any Sky Bingo room.

The giving doesn't stop at the £1,000,000 for Sky Bingo players, because at the end of the promotion Sky Bingo will also be giving away a brand new Vauxhall Adam in a colour of your choice!

The entries to the £1,000,000 prize draw will be carried forward and bundled together to form one single prize draw, and a player will be chosen at random by independent adjudicators to win the Vauxhall Adam.