What Are BBz's At Butler's Bingo? 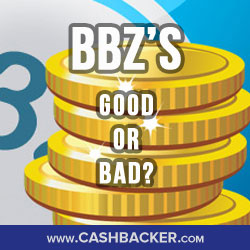 So, What Are BBz's And Are They Worth It?

Did You Know?
Cashbacker members get lifetime cashback on losses incurred!
Find out more about how it works & join FREE today.

BBz are "Bingo Bonus" tokens, or money which you can use to purchase bingo tickets. Each BBz is the equivalent of £1, but you can also have 50p worth of BBz. You can't withdraw BBz's but you can withdraw any winnings you have accumulated as a result of purchasing bingo tickets with them. However, wagering requirements do apply to any winnings arising from BBz's so be aware of them. Read on...

Prizes in BBz aren't as good as pure cash prizes as you can't instantly withdraw them. But they're better than nothing and are offered in addition to the usual cash prizes you'd expect from any bingo game. So if you're lucky enough to win, then you can withdraw your cash and use the extra BBz to buy more tickets!

Beware though - any winnings you accumulate as a result of playing bingo using BBz's are subject to wagering requirements. The BBz wagering requirements terms specify that you have to have made a real cash deposit before you can withdraw any winnings from BBz's, and also that you must have wagered at least three times the BBz value (plus deposit if they were awarded as a deposit bonus). So, lets say you earnt 5 BBz playing bingo. You'd have to wager three times the BBz value before you can withdraw any cash won as a result of using them - 3 x 5 = 15 - and as 1 BBz is equaly to £1 you'd have to wager at least £15 before you can withdraw your winnings.

The best thing though is the fact that if you win a progressive jackpot or cash jackpot prize as a result of playing using BBz's then you don't have to adhere to the wagering requirements - you can withdraw the win instantly!

Once you cash out, any remaining BBz's in your account will be forfeited. Although that sounds bad, it's really not that bad - if you're cashing out then you've already won, so it's fair enough that any extra free bonus money be given back.

The main thing to beware of if you use BBz's to play roulette or blackjack then the amount you wager won't count towards the wagering requirement. Again, this is quite fair and something common among all casinos and bingo sites - the reason behind is that you could simply place equal bets on red and black on a roulette table and be almost guaranteed to get your money back (don't try it - it could still land on zero and you'll lose everything!). Blackjack has odds of 51:49 in favour of the house. So again, if you know what you're doing you could play blackjack in such a way that you pretty much come out equal at the end of the game.

I couldn't think of anything ugly to say about BBz's, but I simply couldn't resist squeezing that heading in there :) Maybe you have something to say? Comment below and lets have a discussion!

Join FREE today
& Get up to 20% Cashback, Every Time You Play